Elephant Sculpture Made to Save Wildlife Imperiled By Baking Confusion

Could this bronze elephant sculpture (and even real live pachyderms) have been endangered by polymer clay baking confusion?

Yes. And although the stakes for our polymer clay figures are usually not quite so high, this story shows the importance of baking polymer clay properly.

Meet sculptor Kenneth Howard Weston. He had spent a month creating a large Super Sculpey portrait of a mother elephant with her young calf called “Keep in Touch”. He planned to have it cast in bronze. He was going to enter it in the premiere London wildlife artists’ fundraiser for conservation. He only had one chance at curing his piece correctly. And he was under a deadline.

But unfortunately he didn’t know how he was going to bake his creation. He was accustomed to working in terracotta clay, so he didn't know much about polymer. And his piece was also BIG. It measured 18” x 8” and was almost 10 inches high.

He also admitted to me that he’d never turned on his kitchen oven at all…ever. Only the stove top heating elements had ever been used and that for boiling or frying in pans.

To make things worse, Howard said that his English made oven’s highest temperature was 250°F. He said that he needed 375°F to cure his Super Sculpey.

So how did he get into this predicament?

When we’re driven by a worthwhile goal we can sometimes overlook the obvious and are intimidated by the unfamiliar. This happened to Kenneth and I’m glad that I could help him out.

What Happens When An Elephant Sized Talent Meets An Unfamiliar Material Under A Deadline?

Kenneth Howard Weston has a passion for nature. And he wanted to contribute his artistic talents to preserving and protecting it. So he spent a month of his life creating a piece to enter in the 2017 Artist of the Year competition held as a fundraiser for the David Shepard Wildlife Foundation.

This foundation has been working to save and protect endangered wildlife for more than 30 years. And each June it holds a galleried event that supports artists and the wildlife that inspires them. Fifty percent of all sales from this month-long show goes to conservation and helps provide funds for park protection, outreach and undercover investigations to shut down poaching operations.

Kenneth’s plan was to create a polymer clay sculpture of a mama and baby pachyderm. Then he’d have a mold made and have the piece cast twice in bronze.

He created an armature out of aluminum foil on a solid base. Super Sculpey was laid on the framework. He took care not to make the clay layer too thick. In most spots the thickness was between 1/4” and 1/2”. That’s well within the recommended range of less than 1 inch.

It was time to cure his polymer clay sculpture, but Ken found himself blinded by the urgency of a deadline and the demands of an unfamiliar material. It looked like his oven would not reach a high enough temperature to bake his piece properly.

Fortunately, Ken did the right things next. He asked for help. And he did a test baking.

“Hi Nancy, my English made oven highest temperature is 250f, but I need 375f for my Super Sculpey Clay. how do I solve this issue? My sculpture is packed out with aluminum foil tied to armature, is quarter inch and half inch in places. Kindest regards Howard”

My first reaction upon reading Ken’s email was worry and guilt. I’d been away from my computer for several days. Here was an artist who’d poured his soul into his animal figures and they were potentially ruined because I didn’t get back to him soon enough!

Kenneth’s package of Super Sculpey must have had a bit of damage where the instructions were. Because the baking temperature he was quoted me was 100° too high!!

I quickly shot off an email:

Above 350°F will probably burn your project.

Can Polymer Clay Be Cured If It Doesn’t Reach the Manufacturer’s Recommended Temperature??

That was the gist of the next email from him.

The short answer is NO. Or more accurately, not without a lot of fiddling and pre-testing that can take days or even weeks.

As I explained to Ken in a return email:

Polymer clay is PVC powder mixed with plasticizer and some other stuff (fillers, binders, pigment, etc). And as the heat in the oven rises, the PVC particles swell up a bit and soften, eventually fusing into a solid mass that we know as cured polymer clay.

You need to bake the clay long enough and hot enough for this fusion to occur AND for those particles to fully fuse together to form a solid mass. If you bake at a lower temp, the particles don’t soften enough to fuse well. Also, if you bake for too short of a time, and the particles won’t have time to fuse well. You need both time and temperature.

Longer baking times CAN compensate for lower temperatures, but only to a certain degree. If the PVC powder and  plasticizers don't fuse completely the plasticizers can make your piece brittle.

So you really DO need to get your Super Sculpey piece into an environment where the temperature at or above 275F (130C).

Any food grade oven that can bake a cake, fairy cake, crumbs or buns can reach the temperatures needed to cure polymer clay.

If you, or your significant other are nervous about you curing your Super Sculpey piece in the same oven that is used for baking cakes, cookies, etc put the piece inside a food grade Turkey or meat roasting bag. Seal the bag and put the bag containing your piece on a cookie sheet for support. Then crank that oven up to  275F (130C) and let it bake for the hour that it will take the half inch (or 1.27+ cm) to cure properly.  Click HERE for all the information that you need to bake polymer clay perfectly every time.

Kenneth’s next email was a relief. He’d done a test baking and it had come out toasty and blackened. At that point he took out his oven manual and discovered that it was calibrated in Centigrade, not Fahrenheit.

That’s a common mistake among new polymer clayers. He shouldn’t feel badly about it and neither should you.

Also, I highly recommend that Kenneth (and you) purchase a separate oven thermometer to place inside your oven while you’re pre-heating and baking your projects. Built-in oven thermometers are notoriously unreliable. 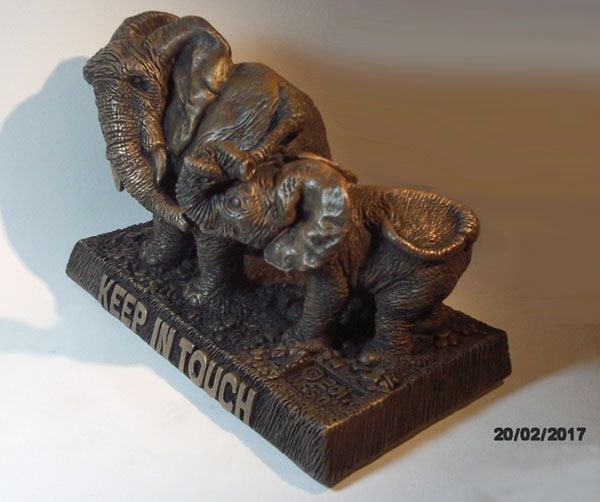 Kenneth’s mother and calf sculpture cured perfectly without cracks or flaws marring his careful work. He got it to the bronze mold makers in plenty of time to meet the exhibit deadline.

And as he hoped, his elephants are making a contribution towards saving the wildlife that he loves.

I highly encourage you to visit and donate to the David Shepard Wildlife Foundation. And if you’re in London from June 28th thru July 2nd make sure to visit all the wildlife artwork at the Mall Galleries.

Got a question about Elephant Sculptures, Baking Polymer Clay or Kenneth Weston?

Share in the box below. Because readers who leave comments are smart and oven hot! I'm Nancy Ulrich, and I'm a Polymer addict. I live in San Diego with my husband Bob. And I've never eaten anything rolled from my pasta machine...More

Copyright © 2013-2020 www.polymerclayer.com. All Rights Reserved. Created by me, Nancy Ulrich. I and my husband, Bob Ulrich, are also participants in the Amazon Services LLC Associates Program, an affiliate advertising program designed to provide a means for sites to earn advertising fees by advertising and linking to Amazon.com or MyHabit.com. This site also accepts advertising and other forms of compensation. Such compensation does not influence the information in this site. If I don't think it has value to my readers you won't find it here. Third party trademarks, brands and images are the property of their respective owners. And since I hate spam this site will always respect your privacy.
Designed by GaliDesigns One more thing, I couldn't have created this without the online business learning provided by SBI (Solo Build It) aka SiteSell.com. I'm grateful.